HISTORY OF OUR LADY OF THE SNOW

Our Lady of the Snow traces its history back to the early 1900’s and the seasonal influx of summer visitors to Blue Point and Bayport. In those days, many city people summered on the south shore of Long Island to escape the heat and humidity of New York City. Blue Point has at least ten major summer hotels and boardinghouses.

History tells us that the first Mass was offered in Blue Point by the Very Rev. James J. Cronin in the meeting room above Rocky Moore’s General Store. Fr. Cronin was pastor of St. Francis de Sales Church in nearby Patchogue. The summer hotel owners and local prominent Catholic residents wanted their own church built here. Finally, in 1917, the Church of Our Lady of the Snow was built (for the cost of $6,600) and dedicated thanks largely through the generosity of Blue Point’s summer visitors.

During the 1920’s and 1930’s, this part of Long Island had a great influx of summer visitors. Many summer activities centered around the parish. The “summer people” tended to be very generous and supportive. Even the annual “Coal Collection” was taken up in August while the summer people were here. Their generosity helped to heat the church and keep it running through the winter. To save coal during those years, weekday Masses were held in the basement of the rectory.

In 1935, the entire church building was raised and a full basement created. This gave us a much needed parish hall. Also in 1935, the Ursuline Nuns came to Blue Point and established their motherhouse here. For many years, the Ursulines taught religious education classes and “released time” at Our Lady of the Snow. Also, until 1935, Our Lady of the Snow was a one-priest parish. In 1935, however, the first curate was assigned to Blue Point.

After the Great Depression of the 1930’s and World War II in the 1940’s, Blue Point and Bayport changed. Many summer homes were now winterized. The summer hotel era had ended. Most of the old summer hotels and boardinghouses burned down. Both Bayport and Blue Point saw many new homes being built and our year-round population grew.

In 1957, the Diocese of Rockville Centre was created encompassing both Nassau and Suffolk Counties. On Palm Sunday, 1967, a fire destroyed the sanctuary and sacristy of Our Lady of the Snow. Thanks to the quick action of the Blue Point Fire Department, the building was saved and none of the stained-glass windows were broken. The new reconstructed sanctuary reflected the liturgical changes introduced by Vatican II. In 1969, a new church-auditorium building was dedicated and named in honor of Rev. Charles J. Murphy, who was pastor here at that time. From the 1970’s to the present, Our Lady of the Snow continues to be a growing parish offering its parishioners a full array of ministries and activities all centered around the Mission Statement: We are a community on a journey of faith who magnify the Lord and rejoice in God our Savior. Through Word and Sacrament we celebrate God’s extraordinary love in serving one another. Together we become whom we receive, the Body of Christ.

(Thanks to Mr. Gene Horton, our local historian, for giving so generously of his time and talents in compiling this history.) 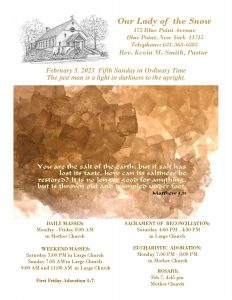 Information regarding a new deadline to file proofs of claim for victims of sexual abuse who were 18 or older when the alleged conduct occurred and the forms to use, can be found by clicking on the following like to the Diocese’s bankruptcy website and scrolling down the page: https://dm.epiq11.com/drvc